Often referred to as the 'pearl in the Indian Ocean', Sri Lanka offers world-class Scuba-Diving and Snorkelling tours. A multitude of tropical fish, magnificently colourful coral reefs and fascinating ship wrecks can be explored at several locations off the south coast of Sri Lanka.

Hikkaduwa, Weligama and Kirinda provide breathtaking snorkeling and scuba diving opportunities. In the west of Sri Lanka, head to 'Bar Reef' (Sri Lanka's largest reef, easily accessible from the Puttalam district town of Kalpitiya, spanning an impressive 3 nautical miles in length and 1 nautical mile in breadth). But for the country's 'pièce de resistance', Pigeon Island , off Nilaveli (just north of TRINCOMALEE) is a paradise of turquoise-coloured waters and abundant fish and coral life make it the ultimate underwater experience.

All underwater activities are conducted by well-trained and experienced UDI and PADI instructors to ensure your absolute safety and enjoyment.

N.B. Due to the monsoon seasons, west coast diving and snorkelling is generally best from November to April whilst the east coast waters are at their calmest April – September.

Hikkaduwa - With its impressive coral reefs and abundance of tropical fish, HIKKADUWA is recognised as one of the best places for Snorkelling and diving on the Southwest coast (in the southwest season of November to April). With a reputed and long-running diving school located in the town itself, PADI diving instructors are available throughout the season for training and certification as well as leading more experienced divers in some of the country's best ship wreck and reef dives.

Kalpitiya - Despite its natural beauty, the western peninsular area of Kalpitiya in the Puttalam district of Sri Lanka is remarkably untouched by tourism. For keen scuba divers and snorkellers, the largest coral reef in Sri Lanka (‘Bar reef') is only an hour's boat trip from Kalpitiya. This beautiful reef is home to an incredible variety of tropical fish as well as offering sighting of manta rays, reef sharks and the occasional turtle! Diving and Snorkelling are not possible during the southwest monsoon period (May to November). The best times are therefore between late November and early May. Transportation to dive Snorkelling sites is by a fibre glass dinghy of 25 horse power engine. For the more serious divers who want more detailed information on the area, please refer to Nautical Map 1586 (Pamban to Cape Cormorin).

The underwater currents in the seas off Kalpitiya are generally not strong, but are influenced by small tide changes of two high water and two low water tides. The underwater temperature is approximately 75°F so no wetsuits are required (but thin wetsuits could be worn to protect from any bruising from the coral).

Kirinda - On the southeast coast, approximately 10km south of Tissa, lies the pretty village of kirinda. The village itself boasts a superb beach and an interesting Buddhist shrine on the rocks. However, it is best known as a base from which to experience some excellent diving at the famous 'Great Basses' wreck and the Great and Little Basses reefs (southeast of Kirinda). The famous Arthur C Clarke also put Kirinda on the map when he used it as his base for his diving exploration in order to write his book ‘The Treasure of the Reef'. A particularly unique feature of the Great Basses is the light-house that was actually constructed on the reef in 1860.

Weligama - Also known as 'sandy village' Weligama is located approximately 30 km east of Galle. As well as having an attractive sandy bay, this fishing town is also an ideal base for Snorkeling and Diving, with many fascinating sites to explore. For those who'd rather stay above the surface of the water, catarmaran rides are a pleasant way to venture out on the sea. You can also go out further to the deeper waters to see a variety of dolphins and sharks. Possible Period Early November to Mid April.

Trincomalee - Trincomalee (more commonly known as ‘Trinco') is a prime eco tourism venue which is located on the northeast coast of Sri Lanka and offers some of the country's most attractive beaches such as 'Uppuveli' and 'Nilaveli'. Fine white-sand and crystal clear water provides an irresistible combination that won't fail to disappoint any visitor who loves the beach!. Snorkelling around the famous Pigeon island just off Nilaveli beach is widely recognised to be a ‘must-do' activity during a stay in Trinco. 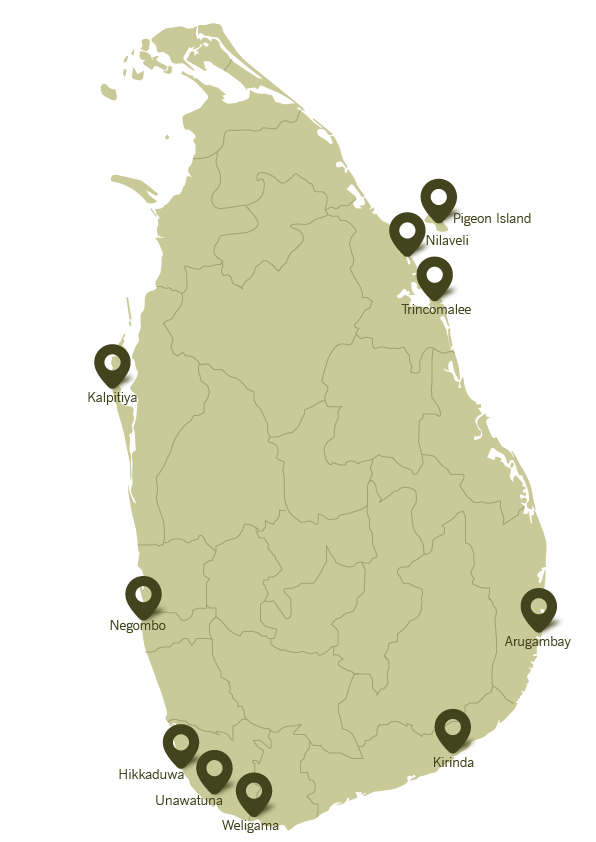 Make an Inquiry on Diving and Snorkeling in Sri Lanka 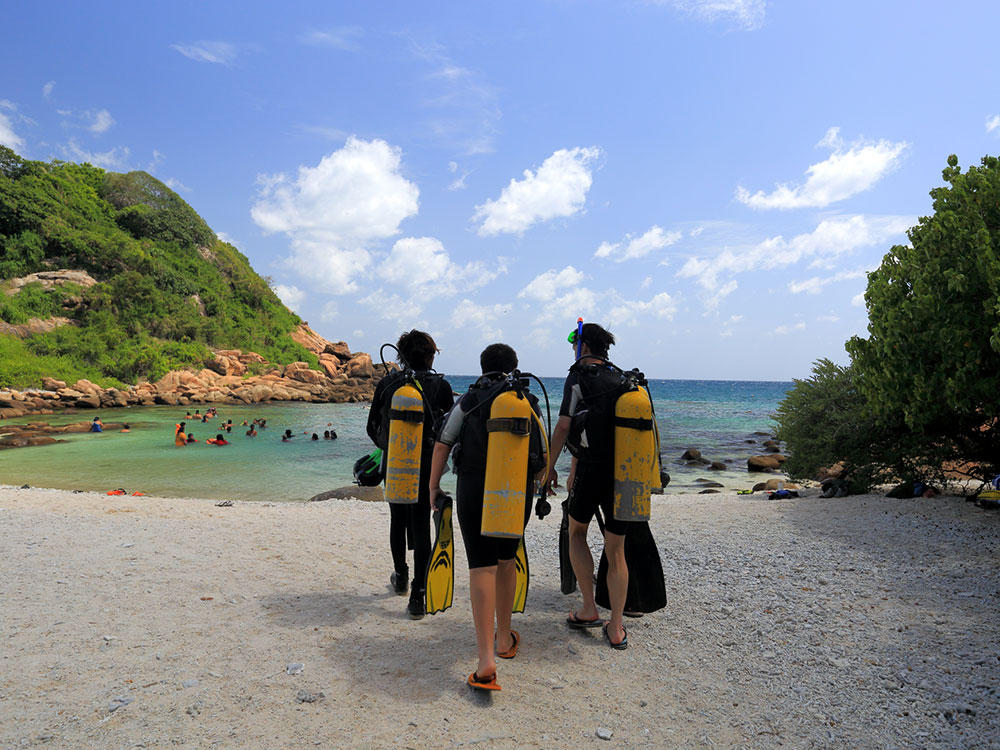 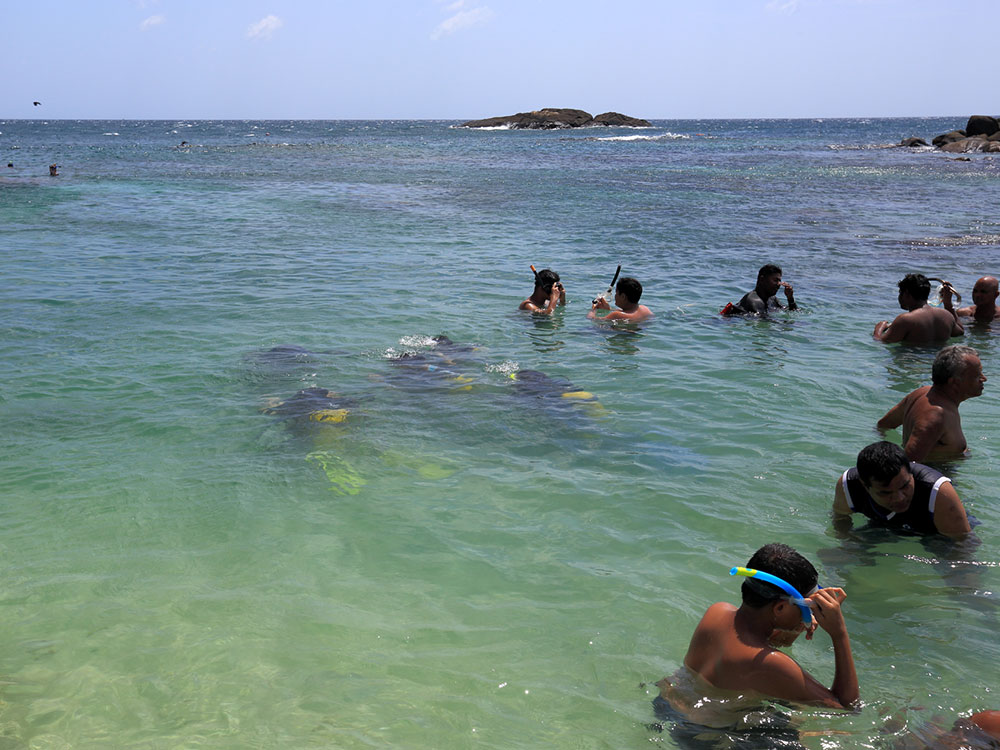 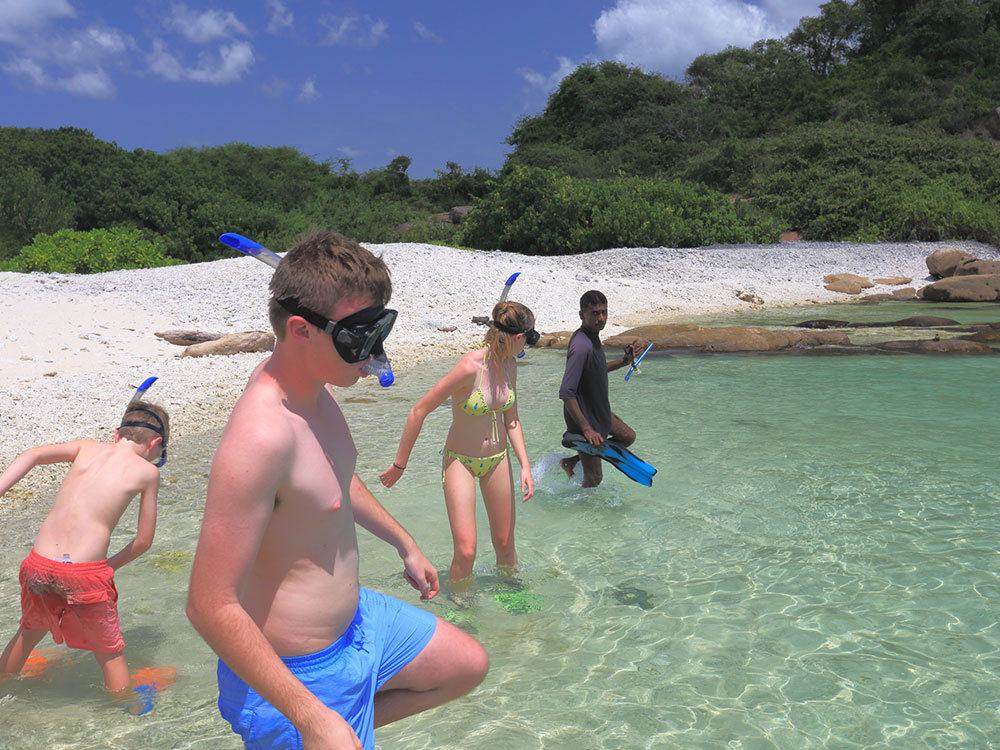 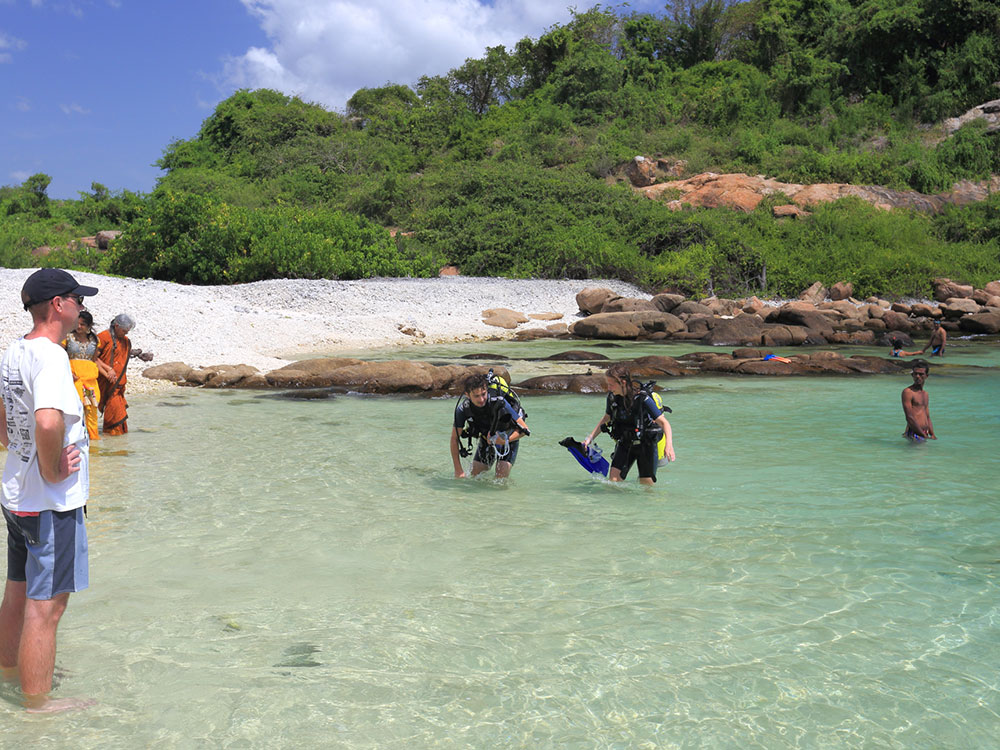 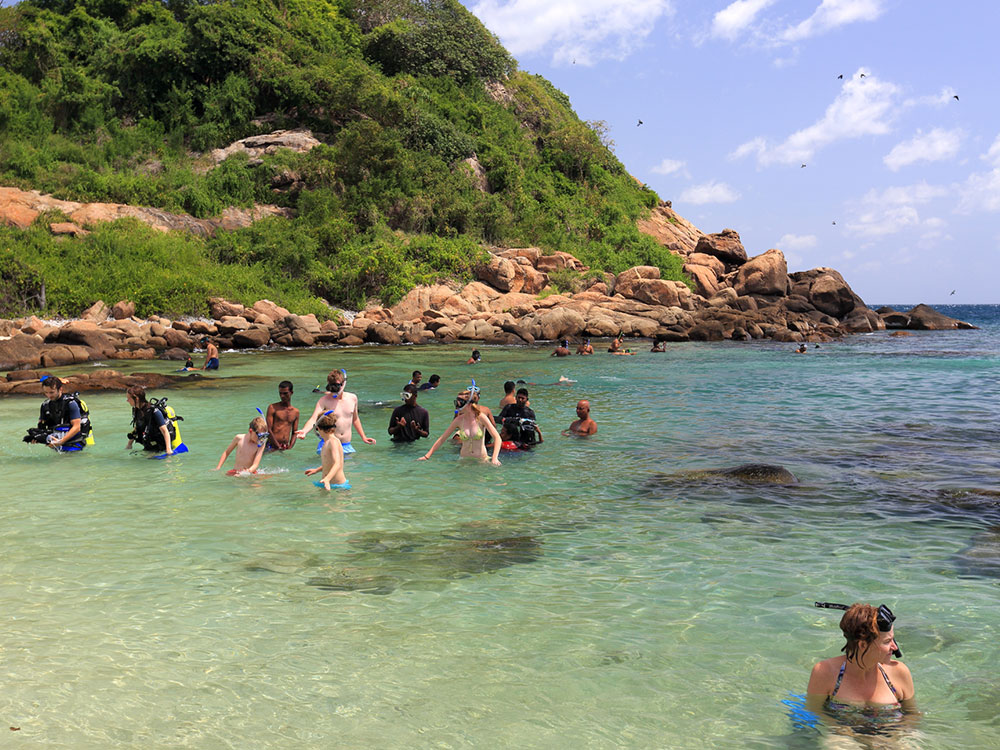 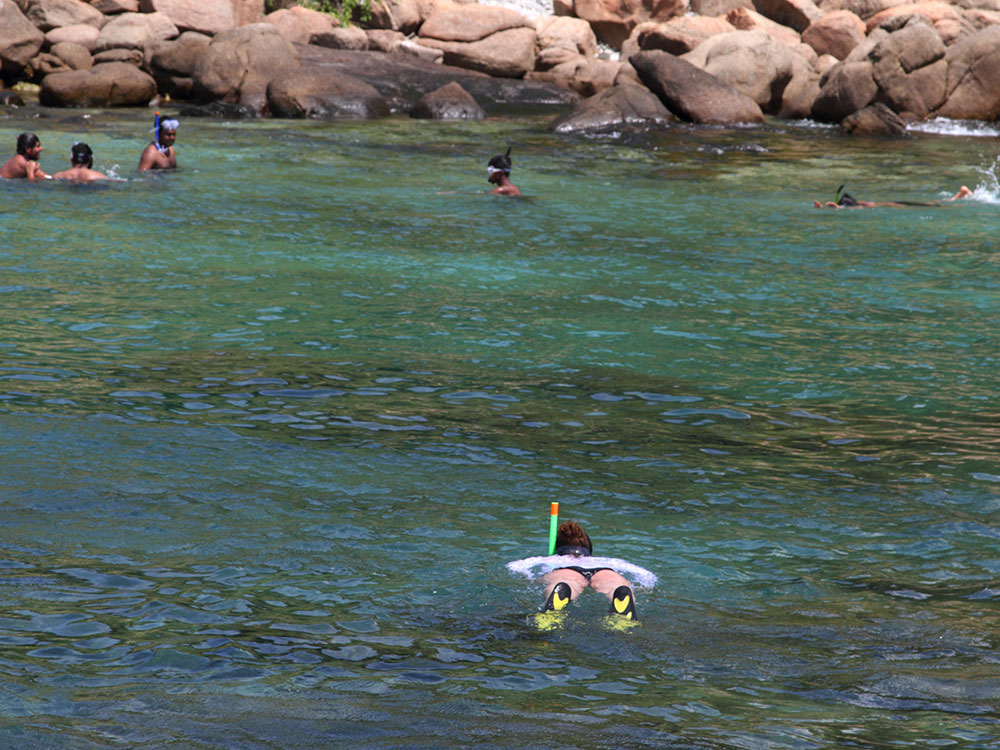 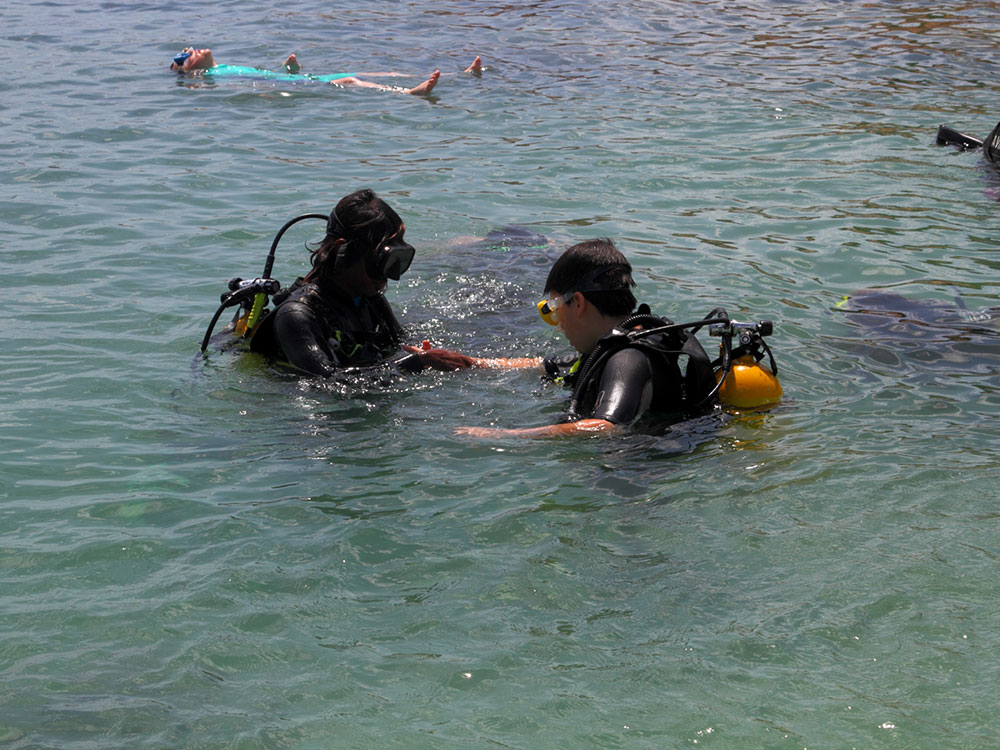 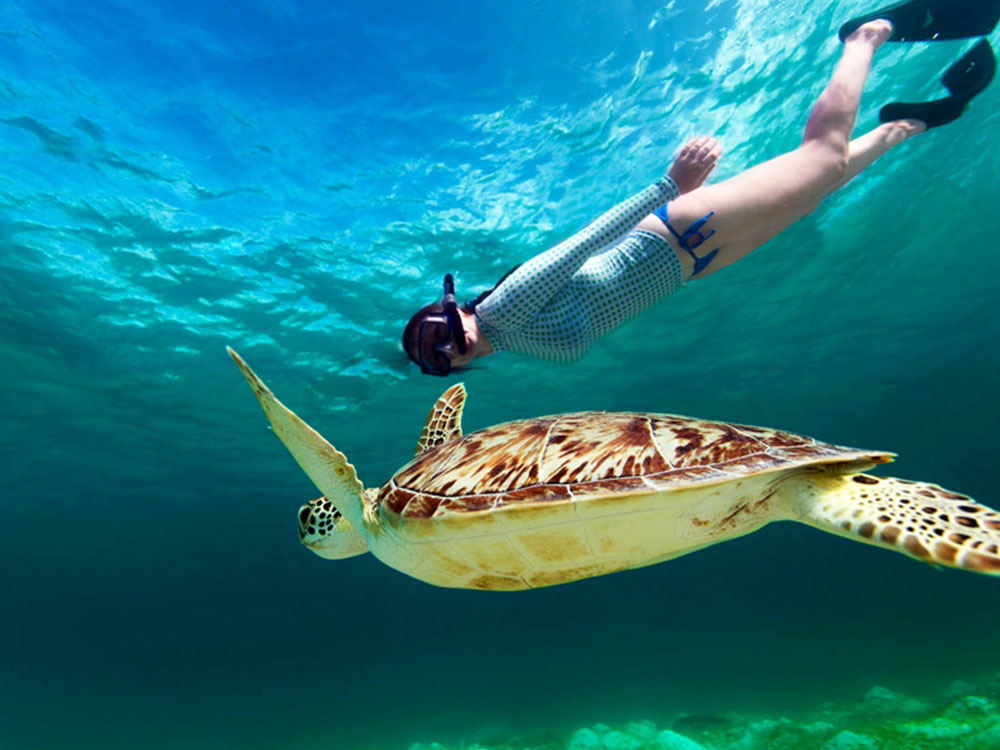